Please be patient, we all have regular day jobs

References, veterinarian, and landlord are contacted

A visit to see where the dog will live and get to know you better. Also give you a chance to know us

*A home visit is MANDATORY and we may not be able to complete an adoption if we don’t have a home visit volunteer in your area.

100% of the adoption fee goes toward the care of these wonderful dogs.

The health condition of a dog may cause the adoption fee to vary. The adoption fee allows GSDRI to provide necessary medical care of the dog from the time it is rescued until it goes to its forever home. This can include, but is not limited to, vaccinations, heartworm test, spay or neuter, worming and also costs for food and housing for the dog while in volunteer home care.

How can I increase my chances of adopting a dog?

Applying for a dog does not guarantee you will be selected to adopt that dog. We receive significantly more applications for puppies and certain dogs. Our criteria for selecting the adoptive home is based on the dog’s personality and requirements. To increase your chances of adopting the dog you want, ensure that the dog matches your lifestyle. In your application elaborate on why you think the dog is a good match, and how you are going to meet the dog’s needs.

What is a home visit / evaluation?

A home evaluation is when a GSDRI representative comes and visits you and your family at your home. During the home evaluation, we compare the answers on your application with what we see. This is done to make sure that there are no false statements in your application and that your home is suitable for a large dog. During the home evaluation, we also get ideas about which dog might fit best in your home. We can talk all we want on the phone with you, but once we see your home and meet your family, we can decide which dog would be happiest living with you.

What if my new GSD doesn't work out?

We want you and your family to be happy with your newest addition and vise-versa; everyone must co-exist nicely. However, if for some reason the new dog does not work out the new guardians must notify us ASAP. We will try to offer training tips, trainer referrals, etc. to help your newest addition settle in better. If nothing works and the dog just is not working out (which does happen sometimes) the dog must be returned to GSDRI.

Is an older dog or a puppy better?

This is one of the most commonly asked questions and one of the hardest to answer. It is all personal preference, it all depends on what you, and your family prefers. We don’t like to refer to the dogs as “older” but “middle-aged.” Puppies are very few and far between, so there is always a waiting list for them. Sure puppies are cute and cuddly, but also remember housetraining, getting up every couple hours to let the pup out, making new arrangements to let the pup out during your lunch break, teething, accidents, more teething, oh the horror!

Most people think that they have to get a puppy because “you can’t teach an old dog new tricks.” Oh no? Well, many rescued GSDs have become therapy dogs, search & rescue dogs, some have received their canine good citizen title, have become obedience professionals or have become agility champions at the ages of 2, 3, 4 and older.

As long as the dog has structure in its life, most of them are always willing to learn new things. They also tend to learn a lot quicker, too. In addition, just think most of the dogs that come into the rescue are between 2 and 5 years old. Some are housetrained already and few have accidents once they’ve adjusting to their new home. They have already gone through their rambunctious puppy stage that drives almost anyone nutty. They are content to sit and watch TV with the family instead of constantly being on the move; but are all for getting up to go for a long run, play an intense game of ball in the backyard with the kids or do some obedience work. Middle aged dogs can be a blessing for some families. Some people, who have already gone through the puppy stages want another dog, but do not want to go through the puppy stages, again!

They are more than happy to adopt a middle aged, more mature dog that still has its whole life ahead of them, without having to go through puppy stuff. As we said, middle aged dog or puppy, it is your preference. We can’t answer that one for you. All we ask is that you consider a middle aged dog, the shelters are full of them and most of the dogs that come to us are middle aged. Older does not mean geriatric, they still have so much spunk and get up and go. Don’t get us wrong, puppies are wonderful to have, but middle aged dogs can be just as fun and wonderful. Remember, puppies turn into older dogs; they don’t stay puppies forever (size-wise. Adult GSDs can be big puppies forever!).

Is a German Shepherd Dog the right dog for me and my family?

The German shepherd dog aka GSD is a wonderful breed, but it is a “high maintenance” animal not suited for everyone. If you are unfamiliar with the German shepherd dog breed, please take the time to educate yourself about the breed before adopting one into your family. In the end, you will be grateful that you did your homework!

A courtesy post is simply that, a courtesy. A dog listed as courtesy in the available dogs is a dog that GSDRI has NOT evaluated nor have we accepted the dog formally into our rescue for various reasons. A lot of times an individual took in a GSD, and we are simply helping that individual get the dog more exposure. In any case, the dog has no affiliation with GSDRI.

The German shepherd dog (GSD) breed was developed for service as a herding and general purpose working animal. The desire to “work” or do something is genetic and is stronger in some GSDs than in others. Most adult GSDs are loyal, loving, protective, and intelligent. Without proper training, GSD can also be rambunctious, destructive of property, and exhausting to live with. It is up to you to guide your dog to suit your lifestyle and that of your family. Most, if not all, GSD need training and a structured lifestyle to thrive in the home and become a canine good citizen.

The German shepherd dog is a large, active dog with a dense double coat. This double coat sheds year round, and produces even greater volumes of fur when the dogs “blow coat” in the spring and fall. Some shed more than others did, especially when not groomed on a regular basis. For some owners, this is not a trivial point.

You should consider the following recommendations as your basic commitment to your new GSD: 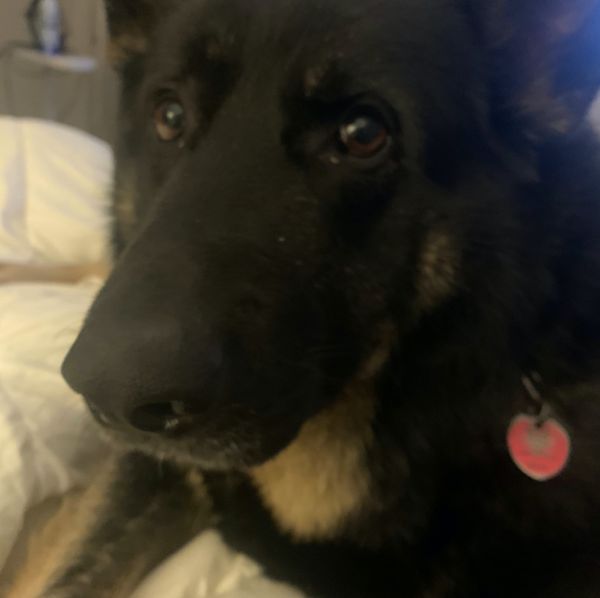 My name is Gus, but I answer to Gussy, Wussy, Gussy the Bear, almost anything. I am a big boy, I am working on it but these things take time. I might have a little mountain dog in me, I love to roll in the snow. I love going for walks with my foster dad and I am really good off leash. I get lots of off leash privileges when we walk. I love to chase geese but I haven't caught any yet. When my dad is at work, I get the whole house to myself and never abuse it or get into things Im not suppose to. I also stay off the furniture, not because I was told to, but because its just how I roll. I never knew what a bed was until I came to my foster dads house, now I love sleeping on it. Beds are the best! Also, I am very patient when my foster dad is home and just hang out until its my turn to go do something. Oh yeah, and I love car rides! Im a rescue from Waterloo. My first year I was on a chain and mildly abused. My second owner adopted me and I lived outside in a large fenced yard for about two years. My owner had shops outside and I would spend time with him in the shops. He liked to feed me people food and I got up to 160 lbs. Then my owner had to go to a home and I went to live with my foster dad in January. Since then, we have been working on my manners and Im learning to dog. I wasnt heavily socialized so I have some learning to do. The good news is Im really smart and I am getting better every day. I was maced by a delivery driver once and I still remember that. So when people offer me their hand to sniff, I get scared and bark. If you just ignore me, then I am content to hang out. Once I know you and trust you, then you can snuggle with me and touch me. When I first came downtown, lots of things scared me. I have learned to be confident and I keep growing every day. I get along with other dogs, I even live with one now. Just remember, I can get a little scared. We have been working on my weight and I am down to 115 pounds (June 21st) and still losing weight. I have been a good sport about losing weight but cant wait to get to my proper weight so I can eat a little more. The vet is monitoring me each month and we are not sure what my healthy weight is yet. Im curious about cats but probably should not be around them. Also, since I grew up without socialization, my foster dad does not let me around small children. I have a big heart and respond well to new boundaries my foster dad sets for me, but I still have work to do. If you are up for a big baby like me, I think we will get along great!